Does Zagreb need another Sava bridge?

Zagreb, the capital of Croatia, is built around the Sava river. The river splits the city into the Northern and Southern parts. Like many cities worldwide, the river was once the source of "life," but for many years, those rivers, as natural dividers of cities, imposes many traffic issues. Think Istanbul and its Bosphorus strait, which splits Istanbul into European and Asian parts, causing many headaches for daily commuters. Bridges, the most common way to span rivers, have limited traffic capacity, and there's the problem. Zagreb is no exception to that problem. There are 7 existing bridges over the Sava river as of now. Still, for many years there's a public debate over whether Zagreb needs another bridge to reduce congestions at the current bridges.

Will the Jarun Bridge decrease the load on the existing bridges?

The fundamental law of road congestion

Before we get into the telematics data analysis, we have to disappoint you, the audience, with the mathematically exact answer: no, the new bridge would not reduce congestions. Or, more precisely, it would reduce it for a while but not in the longer term.

This is a consequence of the so-called "The fundamental law of road congestion", which says that "no matter how many lanes or roads you build in and around the city, you can't stop cars from jamming them up". As Lewis Mumford wrote back in the New Yorker back 1955: "People, it seems, find it hard to believe that the cure for congestion is not more facilities for congestion." The fundamental law of road congestion was formulated first by Anthony Downs in 1962, and it was empirically justified numerous times in cities around the World.

So, why do we bother with analysis knowing in advance that it would not help? The catch with the fundamental law of road congestion is that it takes some time (arguably a long period of time) for the traffic to reach the new equilibrium, i.e., for the new and other bridges to become congested again.

We do the analysis because Zagreb city is not growing at a fast pace and that the time to reach equilibrium may be substantial; thus, it makes sense to build the new bridge.

Let's start by analyzing how the existing bridges are being used and where to and where from people are going when crossing the bridges.

If the new Jarun bridge would decrease the Jankomir and Adriatic bridge load, the significant quantity of trips should have destinations on the southern bank of the Sava river. Alternatively, the number of people benefiting from Jarun bridge should be considerable.

To determine the qualitative analysis of commuting patterns, we've analyzed the historical GPS traces of mixed typed vehicles from the proprietary GPS tracking solution. We've gathered all vehicle trajectories passing through each traveling direction of five Sava bridges during morning rush hours (7 - 9 am).

Jankomir Bridge (Jankomirski most) is a four-lane bridge connecting west Zagreb suburbs and the Jankomir interchange and Zagreb bypass (essentially a freeway). 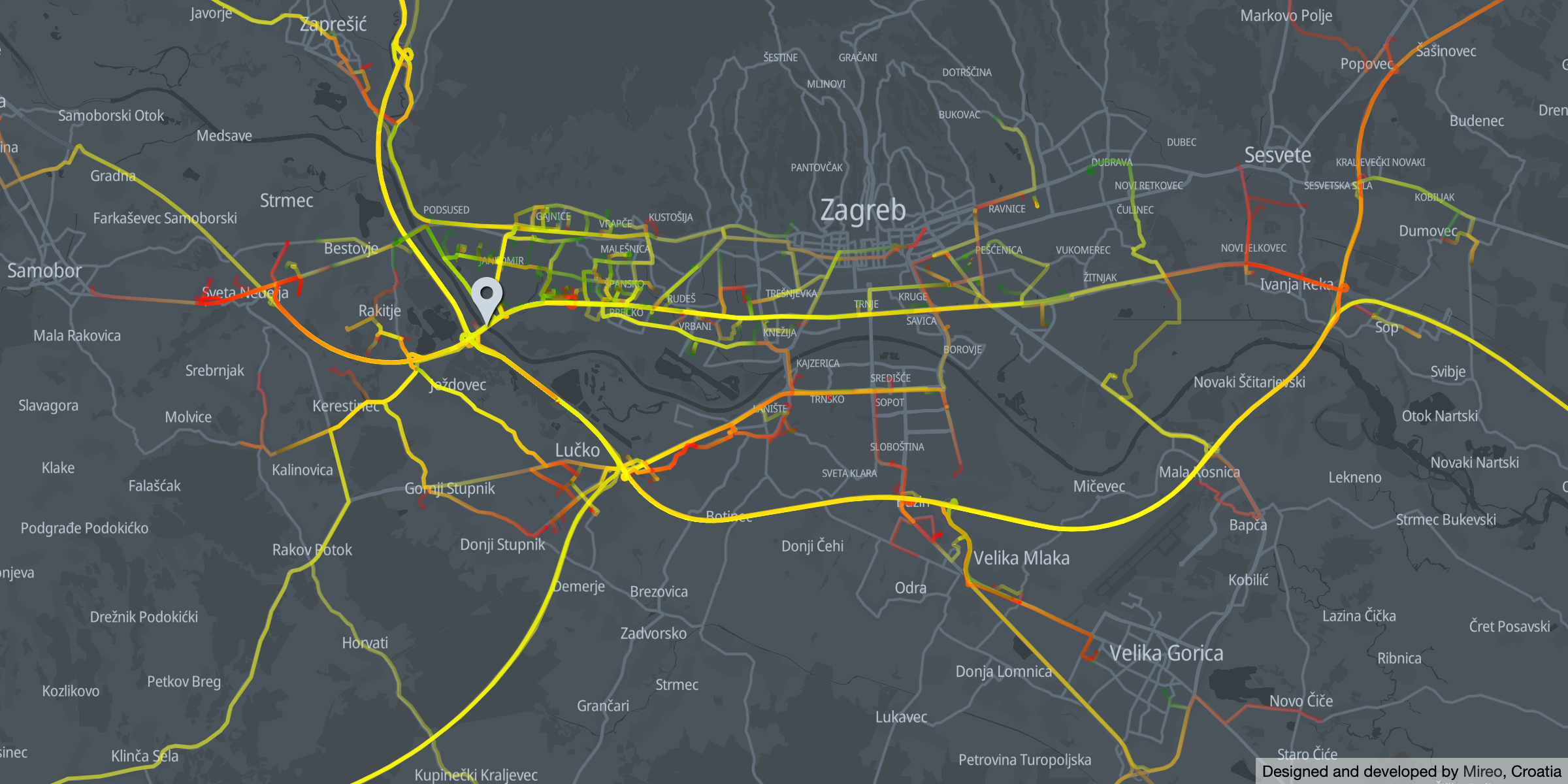 It's safe to say that Jankomir bridge is essentially a transit bridge towards the Zagreb bypass and serves as an alternative route for avoiding city traffic - people cross this bridge to enter the city freeway and ultimately reach distant suburbs.

It's interesting to note how Zagrebačka cesta on the east and Ljubljanska Avenue on the south determine the suburbs (Podusused, Stenjevec) gravitating towards Jankomir bridge.

Drivers exit the bypass on one of its exits towards Zaprešić, Sveta Nedelja, Lučko, Velika Gorica, and Sesvete.

And vice versa - when traveling in the opposite direction, comparable commuting patterns are observed.

Adriatic Bridge (Jadranski most) is the well-known six-lane road bridge, operating as the main entry point to the city and as well as for everyday traveling. 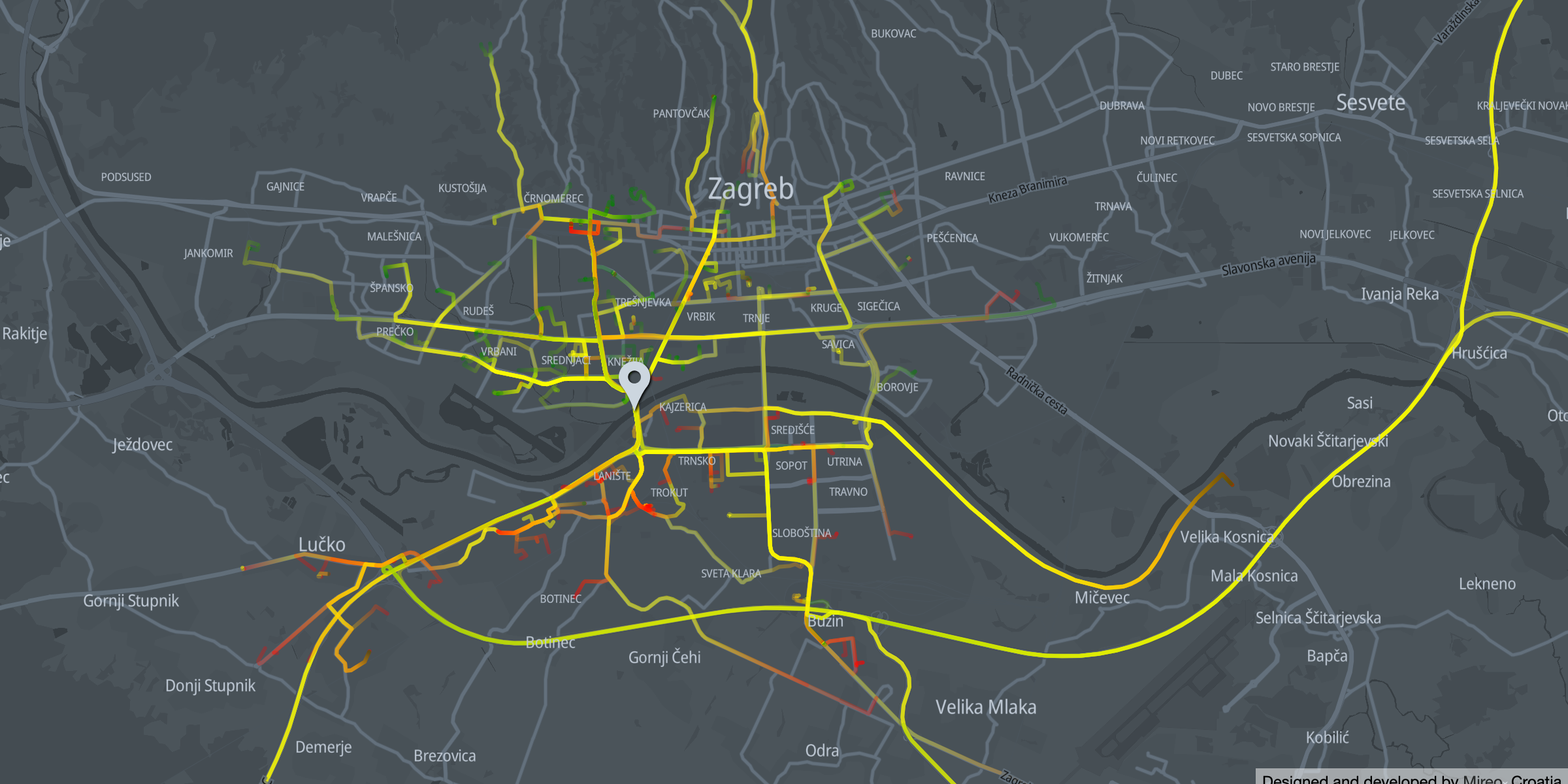 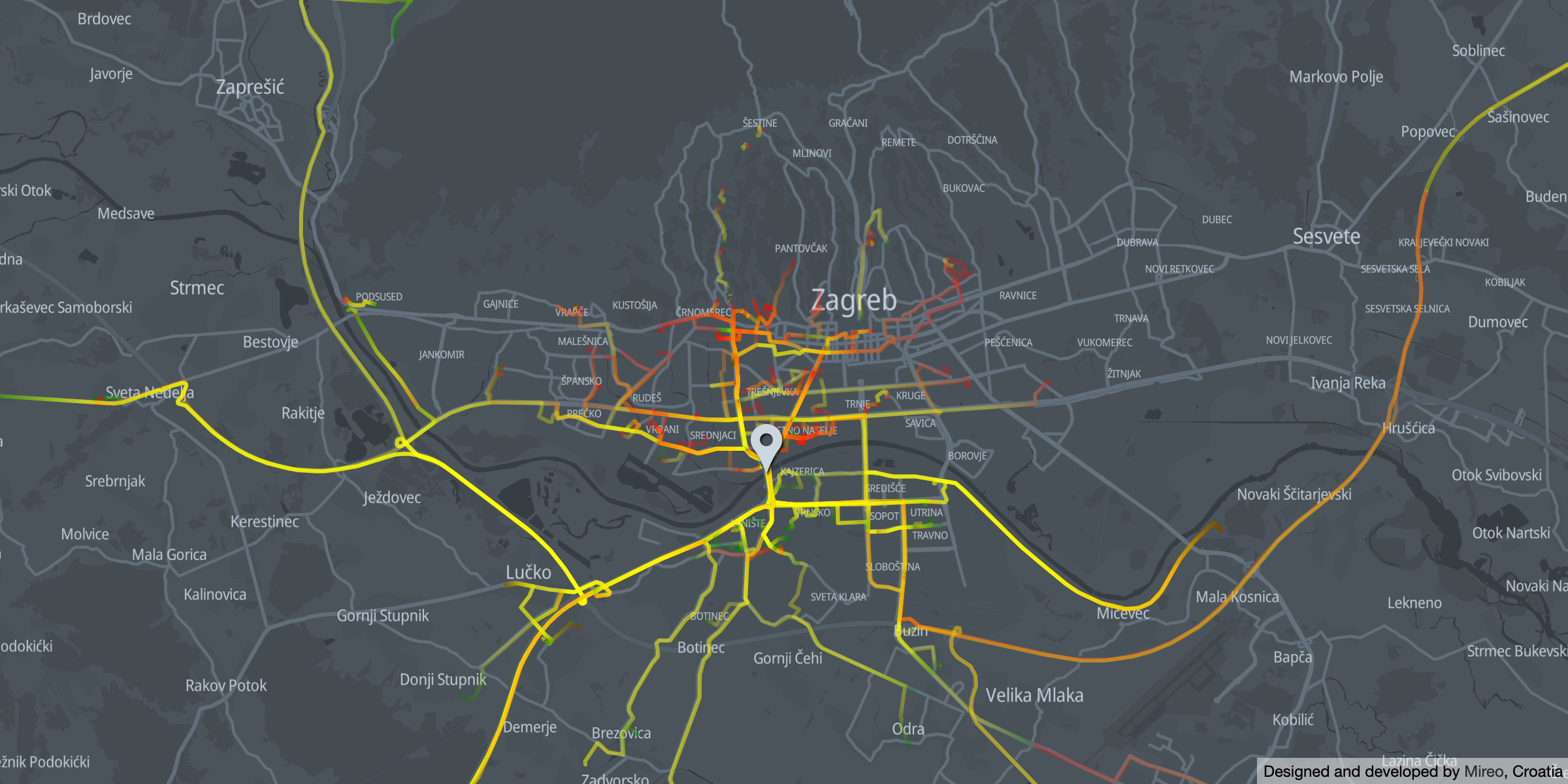 Adriatic bridge is most certainly the city's main entry and exiting point for long-distance trips - from and towards E65 and E71 routes (via Lučko interchange).

There's a clear distinction between suburbs gravitating towards Adriatic compared to Jankomir bridge when it comes to everyday commuting.

This time, the gravitating suburbs on the northern bank are bounded with Zagrebačka road on the west and Savska road on the east (Črnomerec, Trešnjevka North and South).

On the south, it's Novi Zagreb northern from Dubrovnik Avenue.

Therefore, besides long-distance travel, people cross the Adriatic bridge when commuting from Novi Zagreb and Črnomerec and Trešnjevka.

Who would benefit from Jarun bridge?

Based on these qualitative data, the western suburbs of Podsused and Stenjevec would probably benefit the most from the new Jarun bridge. It would likely facilitate the best access towards Zagreb bypass and E65 and E71 freeways.

Since western Zagreb is predominantly residential, the following step would be to gauge the percentage of the morning/afternoon trips that finish (or start) on the other Sava riverbank.

What about other bridges?

For a reference, let's address the commuting patterns of other bridges:

The bridges are also functionally different. The outer bridges have a specific transit functionality - to reach the city bypass, most possibly as a way of avoiding city traffic. The inner bridges, closer to the strict city center, distinctly connect two Sava riverbanks. 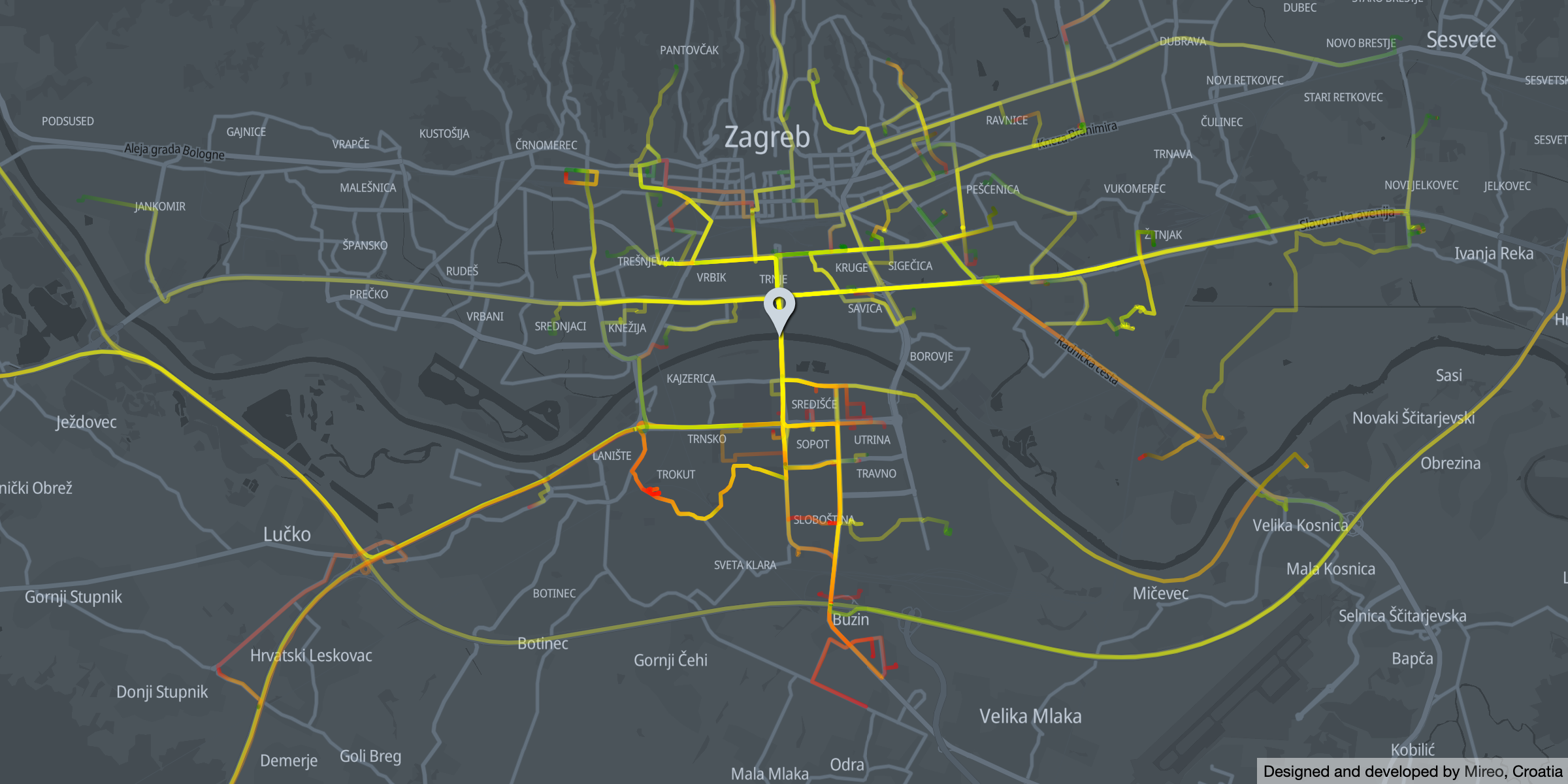 Due to its central position, the Liberty Bridge (Most Slobode) is often dubbed as "The middle bridge", and is mostly used for north-south traveling between:

It's also apparent how nearby southern cities of Velika Gorica and Sisak are also gravitating towards the Liberty bridge. 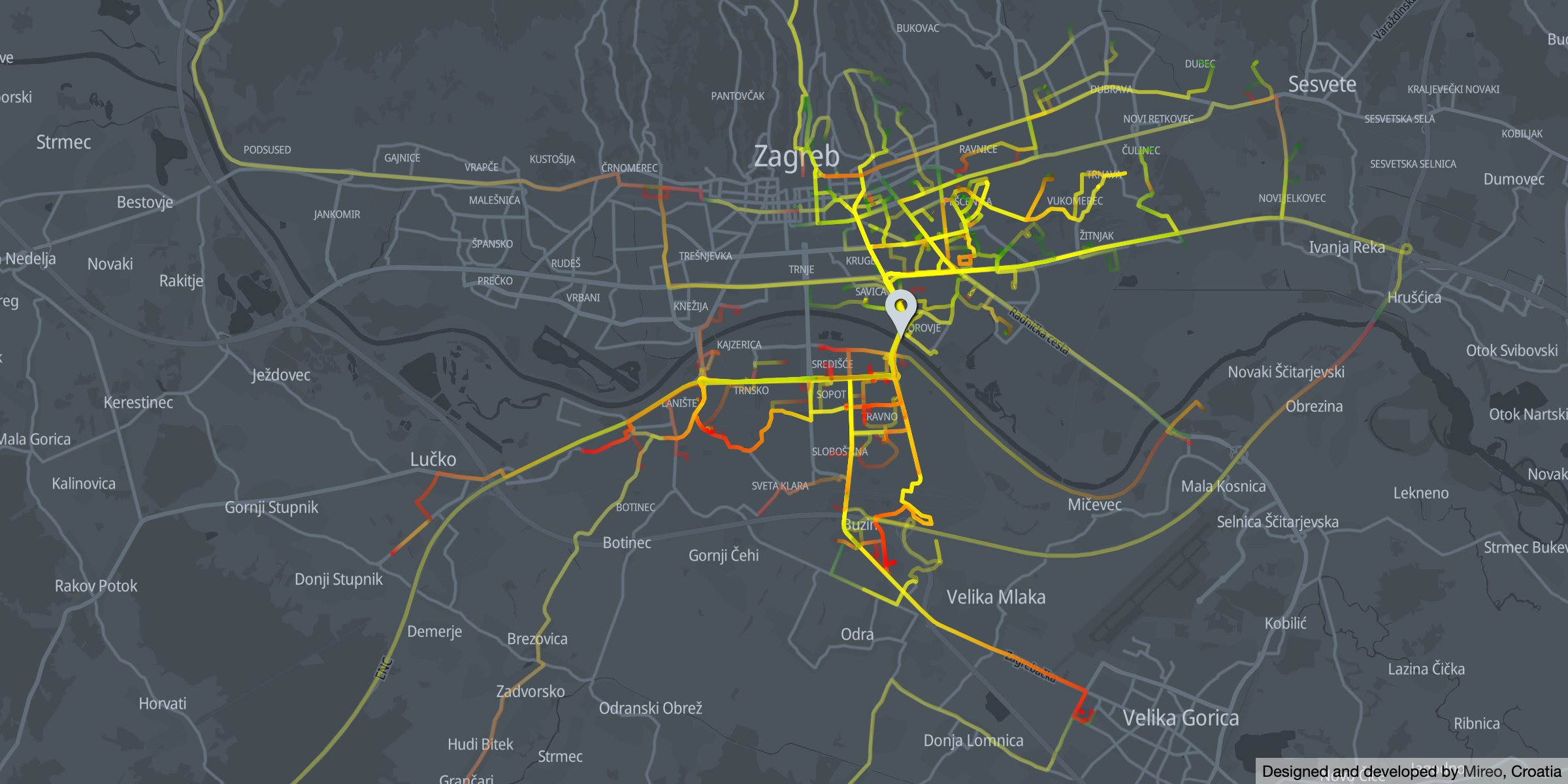 The Youth Bridge (Most mladosti) also shows a clear distinction in origin and destination suburbs. It's predominantly used for travel between:

Traveling direction towards and from Lučko interchange is also prominent. 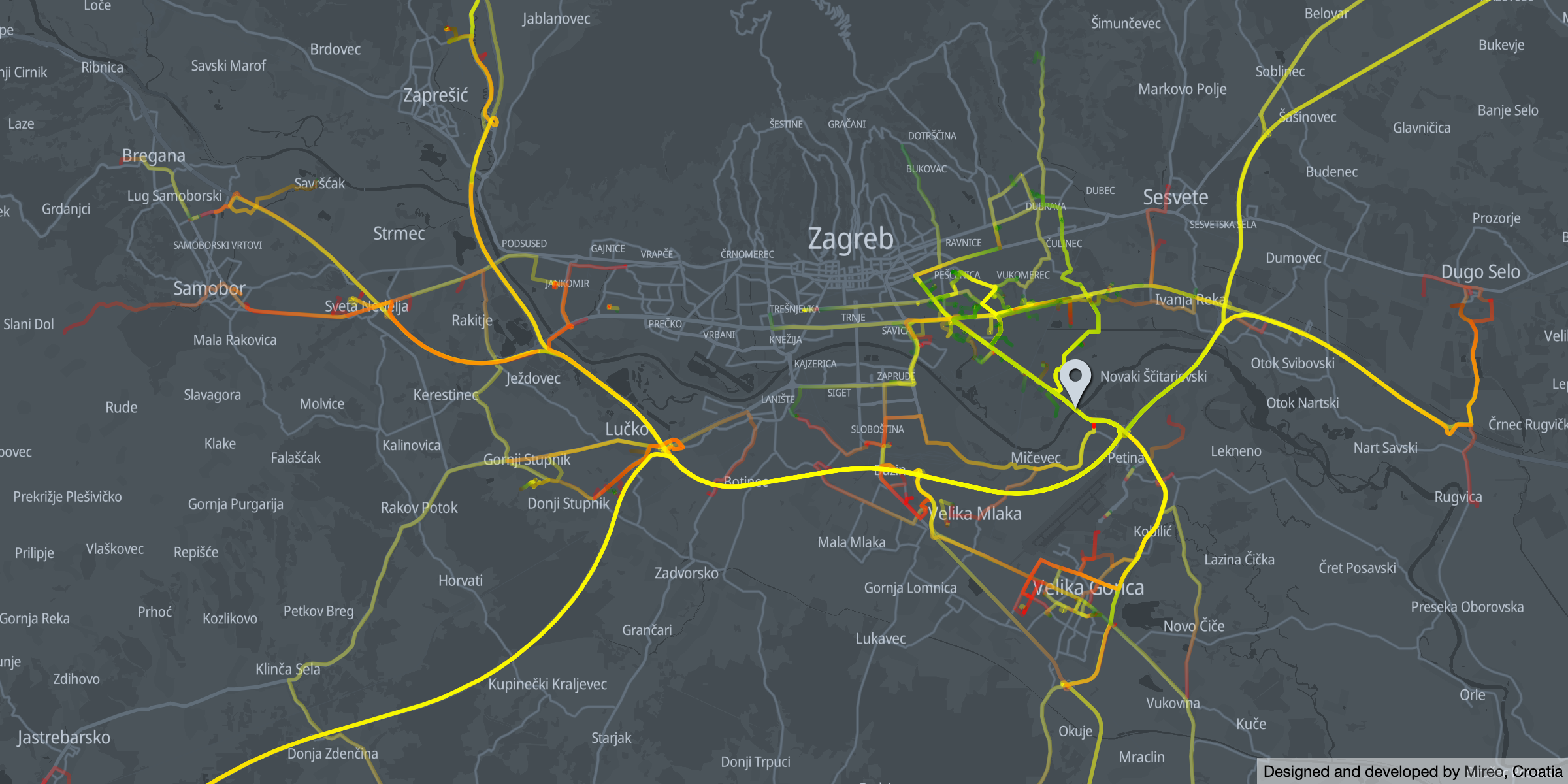 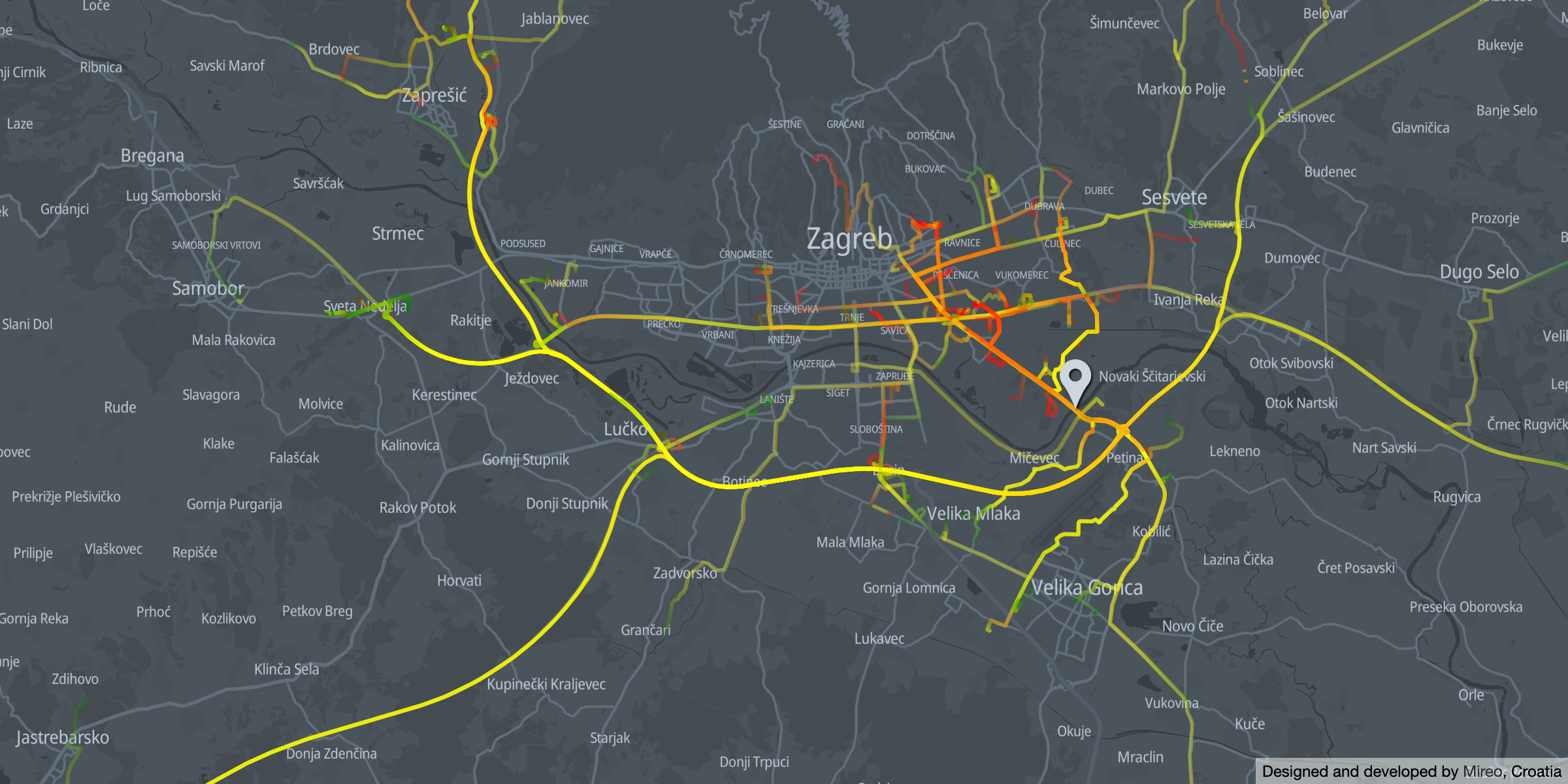 The Homeland Bridge (Domovinski most) has a distinct transit role - to facilitate the traveling between eastern suburbs and Zagreb bypass:

If this topic intrigued you and you want to discover further connected car data applications in smart city solutions, make sure to explore the SpaceTime Interactive Demo.

The interactive demo portrays how innovative and agile city governments can utilize connected car data in revealing and improving traffic intensity, traffic patterns, speeding hotspots, and many others.