Speeding: Does the opportunity make a thief? 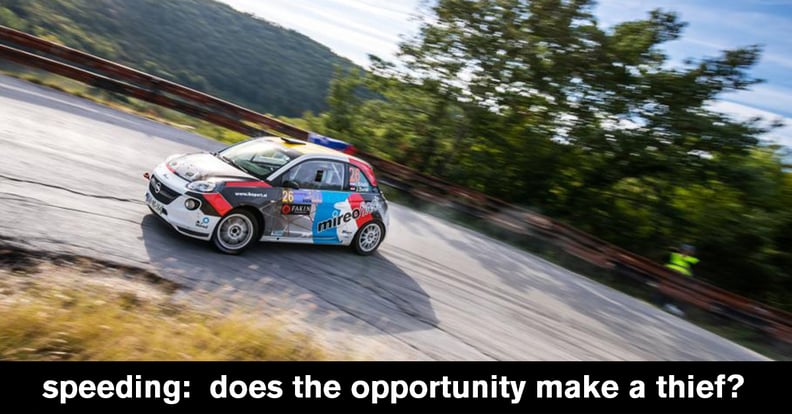 If no one's watching, would you pick your nose? If the roads were empty, would you push the pedal? Let's face it - if you're a driver, you already know the answer (to both questions).

A few months ago, we received 6 months’ worth GPS data of 600,000+ Italian general public's vehicles. One half of the data covered the year 2019, and another half covered 2020, including COVID-19 lockdown period. Because we knew that the streets were practically empty during the lockdown, we couldn't resist checking drivers' speeding habits in such times of “unlimited opportunities“. Actually, we were yearning to confirm our suspicions that most drivers will speed if the opportunity arises.

Although this analysis was made on a sample Italian drivers, the results are quite general.

Our comprehensive analysis of the Italian speeding patterns - the frequency and the severity of speeding throughout 9 biggest cities, is available in the e-book format. The goal was to, from an analytical point, evaluate and dissect common stereotypes of Italian drivers, such as Southerners being reckless and aggressive drivers. Click the link below to discover who are the fastest Italians.

The unprecedented pandemic the world faced in March 2020 not only almost provided us a glimpse of Life After People, but it also offered an opportunity to inspect basic human behaviors on so many levels. Transport analysis being our forte, we've chosen to analyze the new speeding patterns.

Back in April in London, UK police reported speeds up to 228 km/h, including events such as speeding 220 km/h in a 65 km/h zone.

Although the frequency of speeding varies between cities and regions, our findings showed uniform increase in speeding on weekends, especially during night-time, and on more free-flowing roads outside the settlements.

Both eye-catching and concerning is the increase in extreme speeding - 40 km/h or more above the speed limit.

Driving at such speeds not only endangers other vehicles, but it increases the severity of possible accident. Italian law calls for 544 - 3,389 € fine and 1-12 months driver license suspension. Canadian law is even more extreme - exceeding speed limits more than 50 km/h is dubbed stunt driving, and draconian penalties include possible imprisonment up to 6 months, a $2,000 - 10,000 fine, a 7-day impoundment of vehicle, a possible 2-year driver license suspension, and a 100% insurance rate increase.

We discovered the increase in likelihood to exceed the speed limit during the night and weekends. However, this was only the starting point in testing the assumption that drivers would take advantage of empty roads and push the pedal to the metal.

Speeding increase during the lockdown. Show me the numbers!

The number of circulating general public vehicles on the roads plummeted by 2/3, leaving the streets empty and luring the speedsters.

But during the lockdown, the percentage of speeding mileage rose from 15 % to 26 %, translating into 2,600 km yearly, or 1,000 km more than usual!
Bari, Naples, and Rome continued to have the biggest amount of speeding - above 30 %!

But, the most prominent switch in drivers' behavior was actually in Palermo, Naples, and Bologna - in which the speeding was 75 % more frequent (talk about taking the advantage)! The percentage of speeding in Bari is typically high to begin with, so the relative change is not as prominent as, e.g. in Palermo.

Pedal to the metal

Speeding increase during the lockdown

Instead of driving extremely fast along only 1-2 % of total mileage, drivers did it along 5-9 % of their total mileage during the lockdown. On average, drivers severely exceeded the speed limit twice as often than they typically would, especially in Milan (2.8x) and Palermo (3x).

During the lockdown, the number of vehicles on the city roads dropped by 2/3 and consequently, the city traffic tremendously accelerated.

In Milan, striking was the effect on the rush-hour travelling on A51 East Ring Road. This A51 segment is a 3-lanes road with 90 km/h posted speed limit and the speeding soared from typical 4 % to 18 %!

The average driving speed from 7am to 9am increased from 64 km/h to 82 km/h, but not uniformly. Driving below 60 km/h became more an exception than a rule. Drivers spent less than 10 % of driving time driving below 60 km/h, compared to a typical 55 %.

Despite the speeding increase, Italy reported 80 % decrease in claims (including those with only vehicle damage), 90 % fewer admissions to ER and also 90 % less fatalities, but didn’t address the severity of injuries.

Why are people speeding (significantly) more?

So far, we’ve determined that drivers are 25 % more likely to speed on weekends and 60 % during night-time. On top of that, during the lockdown, drivers were speeding 1.6 times more than usual, and a stunning 2.2 times more was extreme speeding.

What the weekends, night-time and lockdown have in common is less traffic, which leaves us with a reasonable assumption that if one can speed, one will speed.

Over the years, an abundance of work had been undertaken to address the role of opportunity in crime, but let’s mention only a few.

One of the most benevolent explanations read was the assumption that drivers often match their behavior to perceptual feedback from other cars. Meaning, a few speeding drivers will stimulate others to drive faster, something aligned with a herd effect.

Or quite the opposite - the lack of interaction distracts the drivers, and they unconsciously speed. People are generally more inclined to socially desirable behavior when being observed by others. Or translated, drivers are more likely to obey the speed limits when surrounded by such drivers and to imitate alike behavior.

The false security assumption - due to less vehicles and pedestrians, drivers got a false sense of security and more room for error.

Fewer patrols: With Stay At Home orders, the number of physical police patrols decreased, which definitely provided drivers the impression that they're less likely to be caught.

Or something completely different?

Are posted speed limits in some places just plainly wrong?

One of the "root causes" of speeding in most places is a fundamental disconnect between a design speed and posted speed limits. On some roads drivers naturally, of their own accord, respect the speed limits, making the posted speed limit a true speed limit. On other roads, speeding is more a rule than an exception. In such places, people perceive the sped limits as inadequately set and don't have the incentive to obey them.

The speeding hotspots in Milan

The map shows the top 5 % of locations where the highest number of drivers typically exceeds posted speed limits by at least 20 %.

Milan, top 5 % of locations where the highest number of drivers exceed posted speed limits by at least 20 %

Observing the most common locations at which most drivers don't obey speed limits, few hotspots stand out, regardless of the lockdown: Viale Enrico Forlanini, A51 Tangenziale (East Ring Road) and their interchanges.

Even during the lockdown period, in the lowest-ever traffic, the general public kept speeding the most exactly in those locations. In some A51 segments, speedings even reached the 120-130 km/h range.

Milan during the lockdown, top 5 % of locations where the highest number of drivers exceeded posted speed limits by at least 20 %

For a better perspective: A51 Tangenziale is part of Milan's East Ring highway, the bi-directional, grade-separated, 3-lanes highway with only a 90 km/h speed limit set.

Viale Enrico Forlanini is a 3-lanes (occasionally 2-lanes) road, connecting Milan with Linate Airport, with the speed limit set to only 50 km/h.

The speed limit on A51 interchange is only 40 km/h, which seemingly interferes with driving at high speeds on motorways. For example, the USA provides only advised speed limits on highway ramps, as opposed to mandatory ones.

Our comprehensive analysis of Italian speeding patterns, derived from GPS traces of 600,000+ general public's vehicles, is available in the e-book format.

The e-book, from an analytical point, evaluates and dissects common stereotypes of Italian drivers, such as Southerners being reckless and aggressive drivers.

We compared driving behavior between Milan, Turin, Genoa, Florence, Bologna, Rome, Bari, Naples, and Palermo, focusing on the speeding as the only objectively measured component of aggressive driving. We decomposed the frequency and the severity of speeding during different times of day, days of the week, and road types in each city.

Many thanks to incredible Uroš Modlic for the amazing headline picture of Mireo's passionate rally crew Ivica and Jasna.